100th Anniversary of the Battle of Vimy Ridge

You are here: Home / King's Own Calgary Regiment / 100th Anniversary of the Battle of Vimy Ridge 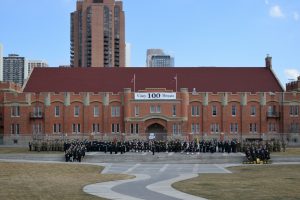 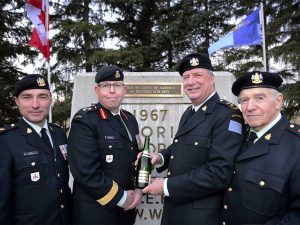 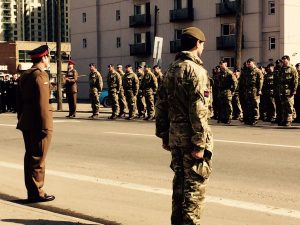 On Saturday, April 8th, 2017 The King’s Own Calgary Regiment, as part of 41 Canadian Brigade Group, took part in a parade commemorating the 100th Anniversary of the Battle of Vimy Ridge. Over 340 military personnel were led along the route by the Brigade Commander, Colonel Eppo van Weelderen. The parade left Mewata Armoury and made its way through downtown Calgary and over the Bow River to Poppy Plaza on Memorial Drive. In addition to the local soldiers, the parade included members of the British Army, who had made the journey from  Canadian Forces Base Suffield, near Medicine Hat.

Presiding over the ceremony was the Lieutenant-Governor of Alberta, The Honourable Lois Mitchell. Attendees also included Major-General Jay Milne, local politicians and consular representatives. The parade was well attended as Calgarians lined the streets and filled Poppy Plaza to pay their respects in the afternoon sun. To mark the end of the ceremony, soldiers from the 20th Independent Field Battery fired off a blank salutary round over the Bow River.

Following the parade, members of the public were invited inside historic Mewata Armoury for a delightful social mixer. The night before, the Lieutenant Governor had hosted Vimy 100th Anniversary Commemorative Dinner on the parade square, which was attended by over 200 people. That evening was complimented by a fantastic array of speeches and presentations that marked the significance of the battle.

On Sunday, April 9th, The King’s Own were graciously invited to pay further tribute to the Vimy centennial by marching as part of a parade in Okotoks. That afternoon the soldiers joined a contingent including veterans, law enforcement and local cadets to march through the streets, and allowing The King’s Own to draw upon their historical connections with the Foothills community.

The conclusion of The King’s Own Vimy Centennial events took place during a very special evening on Monday, April 10th. Members of the Regiment conducted three separate and symbolic ceremonies around Calgary. Attendees included Brigadier General Nick Stanton, Honorary-Colonel Douglas Mitchell, Honorary-Lieutenant Colonel Michael Lang, as well as Colonel Eppo van Weelderen. The first ceremony took place at Pattison Bridge on Macleod Trail where a simple marker commemorates the actions of Private John Pattison. On that date a century earlier, Private Pattison took part in the Battle of Vimy Ridge and for his courageous actions there, he was awarded the Commonwealth’s highest honour for valour, the Victoria Cross. With members of the Pattison family present, The King’s Own conducted a poignant ceremony in recognition of Private Pattison, who was killed in action shortly after his actions at Vimy. The Regiment then met at the 137th Battalion Memorial in North Glenmore Park to open a bottle of Tourant-Salomon champagne donated by Pte Arnold Blaine following his return from the First World War. Finally, the Regimental family, including members of the Pattison and Blaine families, gathered at The Military Museums on Crowchild Trail. Here they were treated to the same Tourant-Salomon Champagne, which was graciously donated by the unit’s former Commanding Officer, Lieutenant-Colonel (Retired) Ross Wickware.

The King’s Own would like to thank all dignitaries, representatives and spectators that attended the events from April 7th to 10th. Your support is greatly appreciated, and ensured the 100th Anniversary of the Battle Vimy Ridge appropriately commemorated the sacrifice and achievements of the Canadians that fought a century earlier. 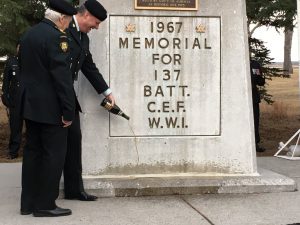 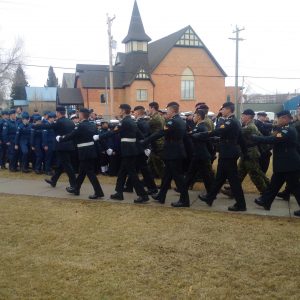 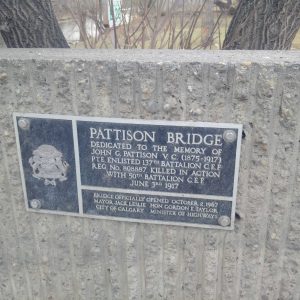