Both courses were held at CFB Gagetown and the King’s Own Calgary Regiment were excited to be sending off a few personnel to be qualified on the new armoured vehicle platform. MCpl Danay and Wennerstrom were able to take time off their civilian work to be able to participate on these courses.

The skills taught on the DRWS course were the ability to mount and dismount the C16 40mm Grenade Machine Gun (GMG) on the DRWS, mount and dismount the coaxial C6 General Purpose Machine Gun, lessons on gunnery theory, daily system checks on the DRWS, the maintenance and use of the Multi-Barreled Grenade Dischargers (MBGD’s), and how to maintain the DRWS and weapons. Complementing the theory portion of the course, there was ample amount of time to practice on simulation training and prepare for the live fire portion of the course. Overall, it was an exciting course and the capabilities of the weapon system were impressive. Targets were effectively and accurately engaged by the 40mm GMG and coaxially mounted C6 GPMG at distances that could not be effectively engaged by a gunner on the G-Wagon platform.

After successful completion of the TAPV DRWS Op course, MCpl Danay and Wennerstrom were loaded onto the Armoured Crew Commander Common Course. This course is the next progression after completion of Primary Leadership Qualification (PLQ) and the students that compose the course consist of Junior NCOs with the rank of Master Corporal. This was the first Crew Commander course to be run in conjunction with the Regular Force in learning Armoured tactics and Armoured Reconnaissance tactics. This was also the first time ever that the TAPV would be utilized in the role it was designated for; Armoured Reconnaissance.

In total, this course had 18 students – 12 students from various Regular Force Armoured regiments, and 6 students from various Reserve Force Armoured regiments. The course would consist of 3 Troops (equivalent to Platoon size) of three different armoured fighting platforms. The “Tank Troop” or “1 Troop” would be consisting of Leopard 2’s with their main armament of L44 120-mm smooth bore gun and were filled by 6 regular force students. The second armoured fighting vehicle utilized was the Coyote Armoured Vehicle with its M242 25-mm Bushmaster cannon. The group was called the “Coyote Troop” or “2 Troop” and would also consist of another 6 regular force students. The 6 reserve students would utilize the TAPV and were known as the “TAPV Troop” or “3 Troop”.

MCpl Danay and Wennerstrom both noted how difficult and challenging the course was. The learning curve was high as the course offered more challenges compared to previous crew commander courses. There was little time to gain a familiarization and be acquainted with the TAPV as for years the vehicle platform they trained on was the G-Wagon. As well, there was less personal time at the end of the training days due to vehicle and weapons maintenance. The integration of armoured tactics with armoured reconnaissance was a new and refreshing experience as for a number of years, there was little to no need of learning armoured tactics in the Reserves due to the G-Wagon platform. Issuing out fire orders to the gunner was a new concept for all the reservists on the course, as gunnery theory and issuing fire orders to a gunner was lost for many years. With the inception of the TAPV, the reserves are better able to augment regular force positions in the years to come and because of the DRWS system on the TAPV we have now bridged the gap of gunnery theory and issuing armoured fire orders that was missing in the Army Reserves.

The off-road capabilities of the vehicle were very impressive and it navigated cross country terrain comfortably and with some ease. It was noted while on the course that the TAPV was able to navigate harsher terrain than the Coyote Armoured Vehicle and was able to go through terrain that a Coyote would not be able to go through. Overall, the TAPV was able to withstand the challenges experienced from an Armoured Reconnaissance context and appeared to be a decent platform for the designated Reconnaissance and Tactical security tasks. There are still some adjustments that need to be made in order to improve the TAPV but overall it left a lasting impression on MCpl Danay and Wennerstrom. The improvements that were suggested by the students on the course will hopefully be seen in the next few years.

The skills that were taught on this course was how to effectively navigate an Armoured Fighting Vehicle, how to conduct various Armoured and Reconnaissance drills, reacting effectively to the opposing force, how to crew command an armoured fighting vehicle, and how to effectively prepare and communicate orders to the crew in an efficient and timely manner. At the end of the course, 5 reservists successfully passed. MCpl Danay and Wennerstrom successfully passed the Armoured Crew Commander Common Course. For his efforts and performance, MCpl Wennerstrom was awarded Top Candidate upon completion of the course. Onward! 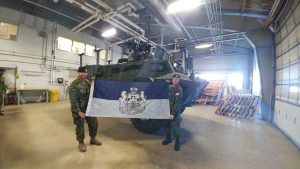 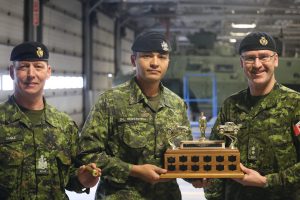 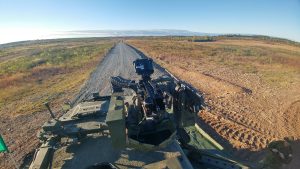 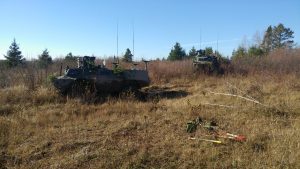 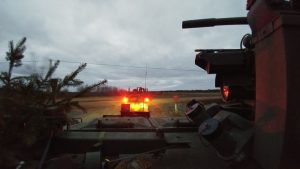 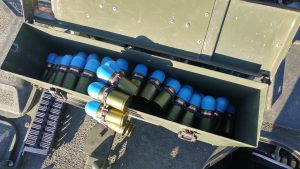