The King’s Own Calgary Regiment was proud to attend the annual Vaisakhi Festival at the Dashmesh Cultural Centre this past Saturday, May 13th 2017. The festival, a celebration of the solar year and spring harvest, is held annually in recognition of the Sikh faith’s formation. One of a number of activities held during Vaisakhi is the Nagar Kirtan, a procession where patrons sing and chant hymns from their holy text. This year`s procession attracted approximately 50,000 people. The King’s Own provided a G Wagon and display complete with tactical vests, gas masks and a large tent. Our tactical display was very well received by the community and we enjoyed a continuous stream of people lined up to take pictures with the equipment on and sit in the G Wagon.  As in year`s past, the reception from the Dashmesh Centre and Calgary`s Sikh Community at large was extremely welcoming, as was evident in their interest of Canadian Armed Forces members participating in the Vaisakhi festival. The King’s Own Calgary Regiment extends its thanks to the Dashmesh Cultural Center and the Sikh community for your support. We are honoured to be part of the Vaisakhi festival. 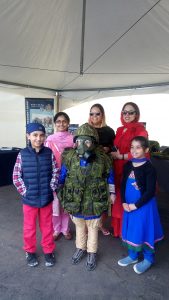 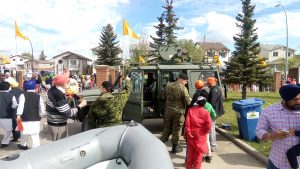