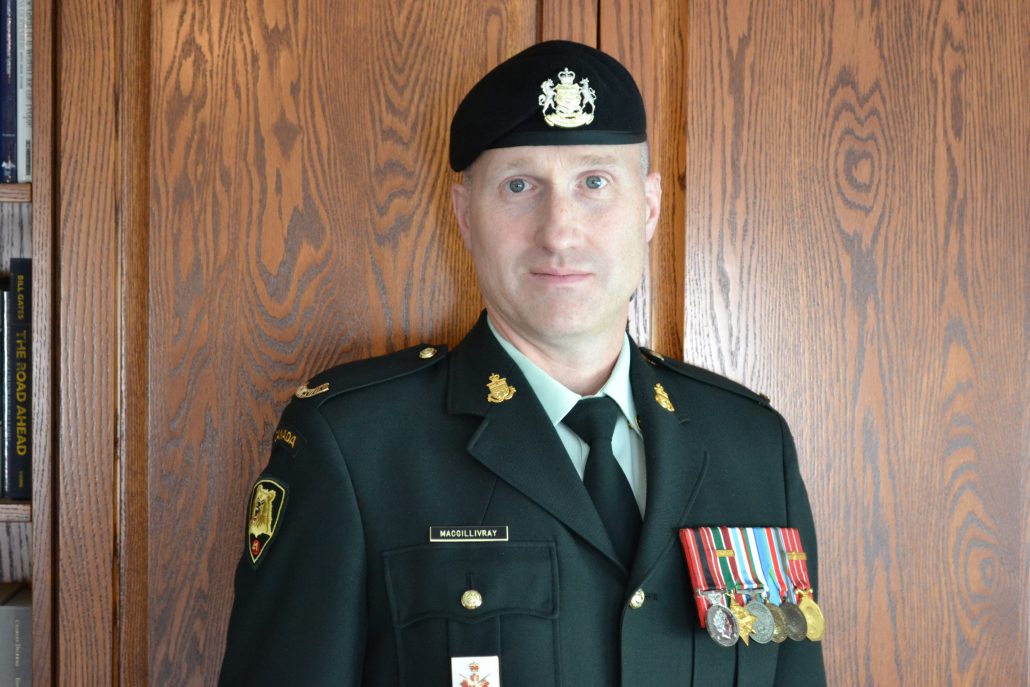 Chief Warrant Officer Troy MacGillivray was born in Calgary and raised on a farm North -West of Airdrie. He was a member of the King’s Own Calgary Regiment Cadet Corp from 1982 to 1987. He paraded with the Cadet Corps in Cochrane, as well as attending cadet training and leadership courses throughout Canada and the United Kingdom during this time. In 1988 he joined the King’s Own Calgary Regiment (RCAC) and completed basic training and trades training courses as an Armoured Crewman on vehicles such as the Lynx and Cougar, until 1991. Upon promotion to Master Corporal in 1992, he deployed as a member of the United Nations Peacekeeping Force in Cyprus as a Section Second in Command. In 1993, he completed a Crew Commander course and was employed as a Junior Crew Commander within the A Squadron, employing the Cougar Armoured Fighting Vehicle. In 1994, he deployed as a member of the United Nations Protection Force in Bosnia-Herzegovina as a member of the Lord Strathcona’s Horse (Royal Canadians) Battle Group. Upon returning he was promoted to Sergeant but, shortly there after, left the King’s Own Calgary Regiment and transferred to the regular force to join the Lord Strathcona’s Horse (RC). Within the LdSH (RC) he served in Headquarters (HQ) Squadron, B Squadron and Regimental Headquarters Squadron as an Armoured Crewman in vehicles such as the Leopard tank and on horseback as a member of the Riding Troop. In 1999, he left the Strathcona’s and returned to the King’s Own. After completing the Armoured Troop Warrant’s course he was promoted to Warrant Officer in 2003. As a Warrant Officer, he was employed within all the Non-Commissioned Officer leadership positions of Sabre Squadron and HQ Squadron. In 2009, he deployed as the Troop Warrant Officer of a Force Protection Troop with the Provincial Reconstruction Team in Kandahar City, Afghanistan. He received the Sacrifice Medal, after an Improvise Explosive Device (IED) destroyed his Light Armoured Vehicle (LAV). The IED blast killed and wounded several members of his crew during this deployment. Upon recovery, he completed the Master Crewman course and was promoted to Master Warrant Officer in 2016 and has been the Squadron Sergeant Major for A and HQ Squadrons with the King’s Own Calgary Regiment. He has completed the Senior Leadership Program and was promoted to Chief Warrant Officer in March 2019.

As a civilian he has been employed as a Project and Operations Manager for several defence and oil field equipment manufacturers.

He has been married to his wife, Rachel, for 20 years, and has a young daughter, Isobel.