On 30 Aug 17, the first of two platoons from 41 Canadian Brigade Group departed Edmonton for Camp Riske Creek as part of the CF’s Operation LENTUS 17-04. Their mission was to support the government of British Columbia in fighting the rampant forest fires that were raging across the province. Effects of the fire varied from homes and local businesses being burnt to a crisp, scorched farmland, dead livestock and wildlife, and a substantial public health hazard from poor air quality, not to mention the potential loss of human life.

Prior to departing Edmonton, both platoons from 41 Brigade (Alberta’s Army Reserves) spent a few day in CFB Edmonton where they received firefighting training and kit necessary for the Op. From CFB Edmonton there was a 12 hour road move to Williams Lake BC where LTF-Pacific was located. From Williams Lake we moved to Riske Creek  where the camp was located and the place we would be calling home for the next few weeks. In total, 41 CBG sent 85 soldiers representing every army reserve unit across the province.

The CAF was assigned multiple tasks throughout Op LENTUS 17-04 from Tier 3 firefighting activities to conducting checkpoints and evacuation orders, all being done alongside other agencies such as the BC firefighters and the RCMP. When the 41 CBG platoons arrived they were being employed exclusively in a firefighting capacity alongside soldiers from 38 and 39 CBG and the LdSH (RCAC). Our firefighting activities consisted of patrolling and mop up activities along the perimeter of the fire. Every day started with a briefing from the platoon’s strike team leader at 0700hrs and then crews headed out to the Area of Operations, usually returning to camp between 1700-1800hrs each evening.

While patrolling, our task was to identify hot spots and extinguish burning coals beneath the ground that could reignite as a fire on the surface. Patrolling is a tool used by the firefighting services in BC to ensure there is a healthy perimeter around the fire that no longer contains any hot spots or fires. Establishing this perimeter enables those who are a part of the incident command team to be sure that the areas are safe and that the will be contained. Hot spots are usually located by helicopters equipped with thermal cameras that recorded the location while flying over burnt areas. Platoons are then escorted in to the area under the direction of a ‘Strike Team Leader’ from the provincial government’s wildfire services.

Living on camp was quite the experience. The camp was very well run with many amenities available from hot showers to a flying kitchen that never disappointed you with any meal. There was a cell tower and Wi-Fi available for most of the time on camp and a gym for a short period of time.

Overall the experience on Op LENTUS was positive for all. Working with member from many different units and brigades as well as working hand in hand with the regular force was an experience and an exercise of our ability to integrate with anyone in the forces because of the common training we all share. All members of the brigade left feeling like they had contributed to relief efforts in BC and the local communities directly affected by the fires. If and when required, 41 CBG stands ready to support local authorities in the event of the next domestic emergency. 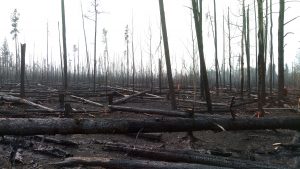 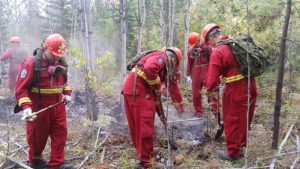 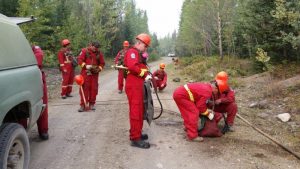 Article and photos credit: Lt Cavanagh and 2Lt Krisko of the King’s Own Calgary Regiment, platoon commanders during Operation Lentus 17-04